The Trash Bag after Mastectomy Surgery - The Shower Shirt

The Trash Bag after Mastectomy Surgery

One doesn’t have time to deal with the reality of no breasts when unbearable pain is the sole focus. The morning after my surgery, the pain on the right side of my chest was so severe I could hardly breathe, and constant, with no reprieve, as if an arrow had been shot directly into my chest. I was of course complaining about the pain and the general surgeon, Dr. O’Linde, who had actually performed the mastectomy said, “Lisa, the breast which had the cancer is the one which normally causes the most pain after surgery.” HE WAS IN FACT CORRECT!!!

In comes Dr. Z, (this is not his real name) the breast reconstructive surgeon responsible for placing the tissue expanders placed in my chest immediately after my mastectomy. With my cousin Mandy sitting by my side, he took the bandages off one by one. I could see Mandy trying not to look startled, but I knew she was. She mouthed quietly, “It doesn’t look that bad.” With that, I started laughing; years ago, when she had half of her nose surgically removed due to skin cancer, I said the same thing to her, “It doesn’t look that bad,” and for the record, I was not telling her the truth either. 

Dr. Z directed me to get out of bed and walk. That’s when I realized I had four post-surgical drains sutured into my armpits extending down to my knees. The doctor then said, “You cannot take a shower until those drains are removed.”  When I asked why, he said, “In essence, what comes out of the shower head is not sterile. By showering without protecting the drain sites you will drastically increase the chance of a surgical site infection. I asked, “How long will I need to take these precautions?”  He said, “Two to three weeks or until the drains are removed.”

With that, I remember saying (very loud), “I’ve just had my breasts cut off, I have dried blood on my chest, I smell like a hospital, my hair is greasy and I can’t even shower? ” At the time, something as small as taking a shower was a HUGE issue, thus, the tears began to flow again.

In came my father and his wife (yes, he got married immediately after my mother died). They began arguing about who was going to stay at the hospital with Mandy and I that day. Next, the nurse comes back in and tells both of them to take their issue out in the hall. At that, I decided to laugh because in my 42 years I’ve never seen anyone tell my dad what to do and get away with it. At that point, my day (even in pain and without breasts) got just a little bit brighter.

After being discharged from the hospital, I was home and began looking online to purchase a water-resistant garment to protect the mastectomy drains. YIKES, NO WATERPROOF GARMENT EXISTED FOR BREAST CANCER PATIENTS WHO NEEDED PROTECTION WHILE SHOWERING!!!!  I used  a plastic trash bag and tied the drawstring around my neck to protect my chest region, an awkward, frustrating and degrading experience. Thus, I had GREAT idea.

In closing for this week, I am forwarding a link to the website, Embracing Mastectomy, a great resource for breast cancer information and post-operative healing tips.  http://www.embracingmastectomy.com.  I’ve also added an FAQ giving clinical reasons why mastectomy patients cannot shower until post-surgical drains are removed:  http://www.theshowershirt.com/FAQs.html 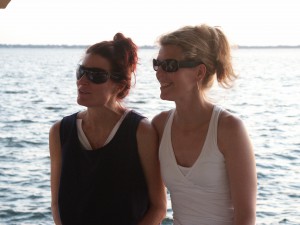 Mandy & Me At Home After Being Discharged From The Hospital

P.S.: Thanks for all of your nice notes and comments. I’ve been surprised to hear from so many individuals from all over the world (I didn’t realize so many people followed Blogs). Please make sure to subscribe and share my weekly blog with someone who might need it.