A Life-Threatening Infection - The Shower Shirt

Two weeks after mastectomy surgery, I went to bed feeling somewhat dizzy. I woke up at 2 am and felt as if I was having a heart attack as I had pain radiating up and down my left arm. I struggled to the bathroom but quickly passed out. I was able to regain consciousness and immediately called my surgeon who had performed my breast reconstruction surgery (Dr. Z).  I told him what had happened and asked if he thought I might have an infection, based on the pain in my chest. He quickly said, “I saw you at 4 pm yesterday; you had no signs of an infection so go back to bed. If you don’t feel better in the morning, call your primarily care physician.” I was confused since I had explained I was running a temperature of 103, had passed out and my post-surgical drain had thick mucus liquid draining into it. However, since we are conditioned to trust our physicians (most of them anyway), I went back to bed as instructed.

By 8 am, the following morning, I couldn’t hold my head up. My significant other David, though I call him Phil, was out of town and his brother, Robert, was staying with me. I texted Robert and asked him to come upstairs when he awoke as I was sick and needed help getting down the steps. As instructed by Dr. Z, I phoned my primary care physician, Dr. Mostafavi, who said, “Call 911 immediately and get to the emergency room.” I did just that and was in the ER within 45 minutes.

The ER physician ran a STAT blood test and my white blood cell count was 18,000 (normal is 4,500 to 10,000) and stated I had a severe surgical site infection in my left tissue expander. (After mastectomy surgery, if a patient chooses to immediately undergo breast reconstruction, the surgeon places a tissue expander in the socket to keep the skin stretched before an implant is placed). The ER physician also stated I was lucky to still have one of the post-surgical drains in place as it was helping to drain infected fluid; otherwise, I could have been septic, a clinical term referring to pathogenic organisms in the bloodstream caused by a serious infection. (Remember, I was a health/medical reporter and love this clinical jargon!!!)

With that, the ER physician admitted me to the hospital.

This entire experience reminded me of a conversation I had with Fran Dresher (actress of the TV show ‘The Nanny’ and uterine cancer survivor), who I met while coordinating media interviews at a cancer charity event.  Fran, whose diagnosis of uterine cancer was delayed by more than two years despite multiple physician encounters attempting to find the problem, spoke frankly about her misdiagnosis, and the importance of being her own healthcare advocate. She said, “I don’t let anyone be in sole control of my money, why would I let anyone be in sole control of my body or healthcare decisions. We have become infantile because we let doctors make all of our healthcare decisions for us.” 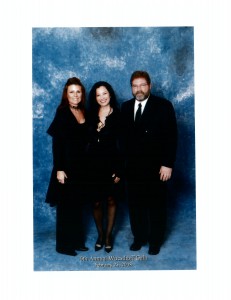 That statement stuck with me, long before I was ever diagnosed with breast cancer. The moral of this story is when it comes to your health, always follow your intuition. I knew I was gravely ill that morning but chose to listen to my physician because I was physically and emotionally vulnerable.  At the time, I thought he was more knowledgeable than me in making the best decisions regarding my health ……

In the meantime, I’ve enclosed a photo of Fran, myself, and my brother Shawn.  Check out Fran’s website at www.cancerschmancer.org.