With my Shower Jacket prototype in hand, I began meeting with whomever I could who might have insight into what I was supposed to do next. I spoke with my CEO, Mr. Emil Miller, and the CFO, Mr. George Fayer, who were at the helm of Wuesthoff Health System, the organization I was employed by as a media strategist and new business development director.

I thought maybe, since both had worked in corporate healthcare administration for many years, they might have insight into what I was trying to create, as well as the businesses of Home Medical Equipment (HME) and Durable Medical Equipment (DME) companies. I felt the product could be perfect for various healthcare retail locations, but wanted to hear opinions from experienced healthcare executives.

I had worked with both gentlemen for four years, and had a great working relationship; of course, during those years, we had a myriad of arguments on media strategy in terms of what ‘to say,’ versus what ‘not to say’ to the media, but we co-existed very well, and absolutely respected their opinions when it came to my idea. 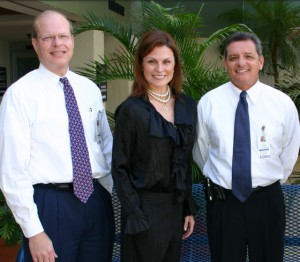 Emil Miller, George Fayer and Myself

I was pleasantly surprised by both of their positive responses. It’s because of Mr. Miller’s insight we eventually changed the title of the product from ‘Shower Jacket,’ to ‘Shower Shirt.’ All I needed to hear Mr. Fayer say was, “With the trend of expanding women’s services, I could definitely see us purchasing a product like this for our HME locations.” With that said, and mind you, CFO’s are extremely tight with the purse strings, I thought I might be onto something. If I could get Wuesthoff’s (very conservative) CFO to make positive comments about the usefulness of this creation and the interest in purchasing, I felt other hospitals, mastectomy boutiques, and HME/DME organizations might follow suit.

But first, I had to find a manufacturer! In doing so, I reached out to a friend who had a friend that imported/exported automobile parts. His name is Mike, but I have now named him my Chinese liaison, though he’s not Chinese. Whoops! Did I say Chinese? Yes, we reluctantly had the product manufactured in China as all American manufacturers had estimated charges of nearly $80.00 per unit, the same price range we were looking to charge retail. Before this process, I often wondered why companies contracted overseas manufacturing instead of having products created in the United States. Now, I understand why, if this specific product was required to be created domestically, it would have never gone on the market as the American estimate priced it out of the market.

I met with Mike and he said he believed he could get the water resistant manufactured through his overseas contacts, and based on the initial drawings and conversation with the Chinese; we were possibly looking at 70% less than the American estimate. Our prototype was then shipped out for review and we waited for a response.