Securing a Manufacturer & Preparing for Surgery #3 - The Shower Shirt

Securing a Manufacturer & Preparing for Surgery #3

With my new friend, Mike, by my side (otherwise known as my Chinese liaison), we were in communication with the manufacturers.  With a few phone calls back and forth, the group ultimately stated they could recreate and manufacture the Shower Shirt product. However, manufacturing and shipping their version back to the US would take a few weeks. I was still not thrilled about having the product manufactured in China, however, my desire to keep women out of trash bags in the shower post-mastectomy was far greater than my reluctance to work with an overseas company, therefore, I felt good about our progress. 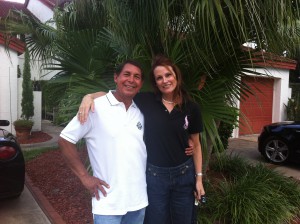 Mike Wilson (my Chinese liaison) & I

While working with Mike on the logistics of importing and exporting, I was also able to go back to work (part-time). Though, at the same time, I was preparing for my next surgery; the third in five months. The timeframe (November 2009), was exactly five months after my mastectomy, and four months after the devastating infection which resulted in removal of the ‘left’ breast tissue expander. This upcoming surgery was needed to exchange the ‘right’ breast tissue expander with a permanent breast implant.

From a clinical standpoint, tissue expanders are sutured into the chest wall deep into the pectoral muscle to keep the breast socket open after mastectomy surgery. Expanders are quite lumpy with no give to the skin, thus, painful with movement. Conceptually, expanders are used to help create a more refined breast shape, once the permanent implant is placed.

In my case, the tissue expander was placed after the breast tissue was removed and filled partially with saline. Within a few weeks I was having expansion procedures. My expander had a port and was accessed with a needle through the skin. Each expansion took only a few minutes, and the amount of fluid inserted depends on the requested breast size. For me, I only wanted small, Perky B Breasts, so I chose minimal procedures, even though Dr. Z tried to talk me into larger implants!

As you may remember, my right breast, otherwise known as the breast with cancer, had remained uninfected through the post-mastectomy process. It was my left breast, otherwise known as the breast without cancer which had succumbed to the staff infection. At the present, my so-called left breast had nothing more than an elongated rib with an inverted breast socket which needed additional healing before the surgeons would apprehensively attempt its reconstruction. Therefore, this interim surgery was required to stay on course with the reconstruction process for the breast which initially had the cancer.

Surprisingly, I was not stressed by this upcoming surgery. I felt I had already gone through the worst, and since we had no issues with the right tissue expander all would go well. The down side was I still had to deal with Dr. Z. Whether I liked him or not, he was my reconstructive surgeon. I obviously had no faith in his bedside manner, but still had faith in his clinical skills. Plus, I expected no other sane doctor would take my case since I was such a high-risk, complicated case. With that said, I don’t want anyone to be mistaken, I am not a high-risk, complicated person 🙂