Back In The Hospital Again - The Shower Shirt

Back In The Hospital Again

Again, a redundant, but familiar visual: I was being rolled on a hospital stretcher through Wuesthoff Medical Center Melbourne, in the process of  being re-admitted to the hospital. My cell phone rings. As expected, it was Dr. Z stating; “Lisa, just because your white blood count is high, doesn’t mean you have another infection.” This time, I didn’t argue, or even drop the “f” bomb; I just hung up on him.

During the next several days, I dealt with Dr. Catena, my infectious disease physician. He ordered a ‘PICC line’ be placed to administer a very strong antibiotic called Vancomycin. This antibiotic traditionally has been reserved as a drug of ‘last resort’ and used only after many other antibiotics have failed. Vancomyacin can scar veins, so if the course of treatment is extended for a lengthy period of time, it is administered through a PICC line. The PICC line was to be placed the following week, but was told I could go home and return for the procedure. With that said, I was now going to have an IV stand connected to my PICC line administering this extremely strong antibiotic 24 hours per day, for the next few weeks.

It was Friday afternoon and I had been in the hospital for three days. I was expected to be discharged. However, the nurse came in and said the social worker who was responsible for coordinating my home health care and prepare my hospital discharge, had left for the day. Thus, I was going to have to stay in the hospital for the weekend. I had been there for three days with no essential clinical care except these vein scarring antibiotics running through my body via an IV in my arm. As Phil often puts it, I “ripped her a new one”, and told her these types of mistakes were exactly why the hospital had such poor patient satisfaction scores. I then called my friend George Fayer, the company’s CFO, for help.

To make a long story short, he facilitated my discharge from the hospital that evening, and arranged to have the home health nurse at my home over the weekend. 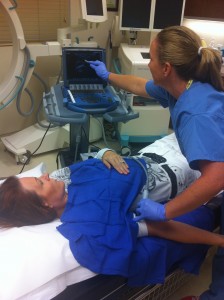 I was scheduled to have the PICC line inserted the following Monday morning. I really had no idea what to expect; I only knew this was the only option to administer this very strong antibiotic into my body to manage the infection. What I can tell you now is that it was not a comfortable procedure; I was wide awake and quite anxious as they put a tube into my arm and targeted (internally) towards my heart. I felt a very strong, warm sensation, which made me more frightened, thus more anxious, I became nauseous and broke out into a cold sweat.

After this procedure, I said to myself whatever was going to happen would happen. Whether I would only have one breast the rest of my life, or even if they could get the infection under control, I just did not have the strength to care any longer. I slept for the next three weeks, and only awoke to see the home health nurse each morning and evening. I’m not sure if I even showered, brushed my teeth and/or combed my hair during entire time. At least I was home.

According to WEB MD: A PICC line is short for Peripherally Inserted Central Catheter. Inserted through a peripheral vein in the upper arm, clinicians push the tube until the tip of the catheter reaches a large vein above the heart to administrator medications.