I proceeded to the shower with the first re-created prototype, which worked surprisingly well. Though I realized quickly, even by tightening the neck region to the point of suffocation, we still needed to add additional water-resistant safety features. Plus, I wanted to see the neck fit more as a snug turtle-neck, versus a basic collar. Even though the re-creation included a water-proof zipper, we worked to add extra flaps on both the inside and outside of the front opening. We also added microfiber to the inside of the collar, and lengthened the cinch strap to wrap around the collar circumference. 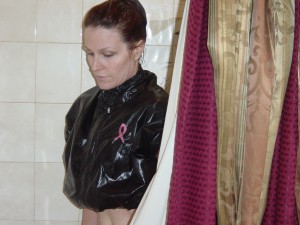 Somewhat comical now, I was trying to design the product which would be ‘one size fits most,’ for the neck. It was amazing. Through my measuring many, many female necks (essentially anyone who would let me), all were outrageously different in size. You had large women with small necks, and then tiny women with large necks, the whole experience was rather eye opening and could have been a Seinfeld episode. In hindsight, I should have been more worried about the size of the female torso, versus the neck, as that’s really where female body variations come into play. We decided to add a neck drawstring for the ‘one size fits most’ goal, and an additional strap above the mastectomy drain pockets to support the four feet drain tubes.

We sent our requested changes and updates to the manufacturer, while also requesting a heavier, more quality fabric. We didn’t expect to receive the next prototype for another few months, so waited patiently.

It was Christmas 2009. With an extremely busy year behind me, I began reflecting. I found the past year quite disheartening in many ways, but also a challenging year with much personal and spiritual growth. I had multiple surgeries to undergo in the very near future, but was able to keep a positive outlook. With that said, I knew something was changing for me psychologically. I could not necessarily explain the changes, but knew something had given my soul life again. I felt after eight years of grieving over my mom, I had finally come to terms with her unexpected death. I knew I had not mentally dealt with my divorce four years earlier, and until that timeframe, hadn’t understood the cause of the initial breakdown of my marriage. This was the first time since 2001 where I actually felt content. I had a great boyfriend, I was alive, healthy (though physically lopsided), without that sad, underlying depression related to everything which had transpired over the past eight years. More importantly, I was looking forward to building The SHOWER SHIRT Co. to help other women better acclimate to the post-mastectomy care process. In looking back, maybe I was mentally inspired by trying to help others, thus, not having the mental capacity to focus on what I no longer had, versus what I had attained. 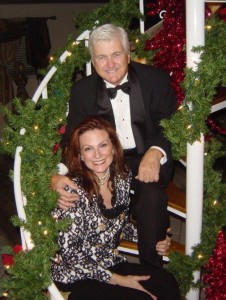 Minutes before this Christmas photo was taken, my significant other proceeded to tell me I looked lopsided in this jacket.  It went like this, “Lisa, you look lopsided. You can tell you only have one breast.”  I won’t go into great detail my exact response back to him, however, it was loud and quite succinct; unsurprisingly, he never broached that topic again :). So for any male Blog readers – what’s the moral of this story?  Do not tell your significant other she looks physically lopsided. Having one breast is not a topic any female need be reminded of.