It was December 2009, and I felt great. Though my chest was visually (and extremely) lopsided, I was exercising again, eating healthy, attaining plenty of sleep and had a consistently positive outlook on life.

My significant other, Phil, and I discussed the need to set up an LLC for the new Shower Shirt company, even though we didn’t have a final product as of yet. The registering of the new entity (The SHOWER SHIRT Co., LLC) was an easy process with Phil (an attorney) being the registered agent. Since I now had a name for the company, I not only needed a product, but a company logo.

I reached out to my friend and colleague, Shawn Johnson, who is an extremely creative and talented designer. He of course asked what my vision was, I said, “I don’t know,” but said, “Just create something which has a female, breast cancer-related branded design.” He looked at me and said, with that ongoing friendly smile, “Well that gives me a major amount of direction to go on.” 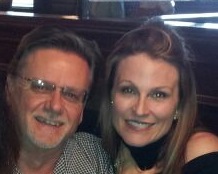 Shawn Johnson and I

Within two days, he had come up with a design. To this day, every time I look at The SHOWER SHIRT logo, I smile and think of my good friend, Shawn, who has been a solid, consistent and extremely supportive friend for many years. Our next step was to have the logo legally trademarked; I had already begun working with my patent attorney undergoing research for the future Shower Shirt patent application, so I requested he go ahead and apply for the logo trademark. A pretty simplistic process and I was awarded the trademark designation within ten months.

My Chinese liaison, Mike, received our first prototype within the next few days. Unfortunately, it was manufactured out of an inexpensive vinyl type material, nothing like the Mossimo® designer brand quality we had shipped to China. However, they had done an extremely great job in recreating an identical design. Mike agreed we would need to work to evolve the quality of the product, while also adding the necessary accessories for water-resistant safety.

So what was my next step? I proceeded to the shower with the first recreated Shower Shirt prototype to test the product.  Though the idea behind the invention was good, would the product actually keep me dry?