After a couple of weeks of morning and evening visits with my home health nurse, she felt comfortable enough to let Phil and I administer the Vancomyacin into my PICC line each evening. With only a week left before the line was scheduled to be removed, I was feeling extremely anxious. Remember, the strategy of having the PICC line was so the Vancomyacin medication (the last resort antibiotic) could treat this second Staph infection. If the drug of last resort couldn’t do the job, what was next? Was I going to be required to go through another surgery to remove an infected tissue expander? Was this the stage of the process where I needed to accept I would only have one breast the rest of my life? A myriad of questions and concerns were constantly going through my mind, along with the expectation of Dr. Z scolding me again for being an infected/complicated patient. 

Coincidentally, I was having comparable issues keeping the PICC line dry (while showering) as I had with the post-mastectomy drains after surgery. With this, I realized the shower shirt sleeves were going to need to be extended to better protect PICC line patients. More importantly, I began wondering what other types of surgery patients could utilize the shower shirt. Had I missed the fact that many other surgery populations have surgical paraphernalia which need to be protected while showering as well?

It had been two months since forwarding our updates to the manufacturer. We were still waiting for the updated prototype to finalize sizing, manufacturing codes and product numbers. I was also in constant contact with the attorney I had retained for patent purposes. Based on his extensive research, there were no patents in place comparable to The SHOWER SHIRT™ garment, so he recommended filing a provisional patent application to protect us against anyone wanting to duplicate, or  essentially “knock-off” the product after being introduced to the market. It was February, 2010; we were hoping to have it in on the shelves by the following October. With that goal in mind, it was none too soon to have the provisional application in place so the product would have a patent pending status before going on the market . I would then have a year to actually figure out the marketability so as to move forward with a final patent application. If the product failed miserably, I would cut my losses and not file a final patent application. But that was not going to happen, correct? This product was needed for mastectomy patients, thus, it would be a success. Or on second thought, was this entire project all about my emotions and the need to focus on something besides my ongoing breast cancer surgery complications?  Questions I pondered on a daily basis, specifically, during my hyperbaric ritual each morning. 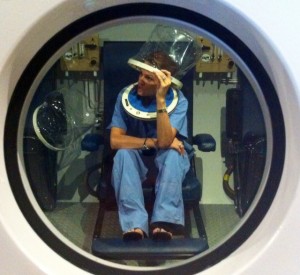 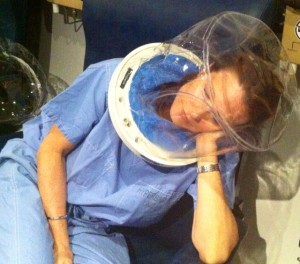