It was May 2010; nearly a year after hearing that infamous statement, “You have breast cancer.” Those words were the predecessor of much emotion, surgeries, infections, the Shower Shirt project, and daily hyperbaric oxygen treatments; therefore, the diagnosis was never far from my mind.

Day in and day out I continued to undergo hyperbaric treatments to keep the infection at bay, and a prophylactic measure to prepare for my next surgery. I was still working part-time, but nearly impossible with half of my day under an oxygen helmet with patients who had also endured wound and infection issues. Though somewhat cathartic, I had spent so much time at the treatment center I had made several friends, including multiple patients who had also acquired breast cancer surgery infections. I had initially believed my situation was somewhat unique, but quickly learned my story was one of many variation of experiences with complications related to breast cancer reconstruction. 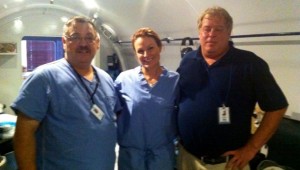 I was juggling a myriad of responsibilities. Along with the daily treatments, I was creating Shower Shirt marketing paraphernalia; working on applications to attain Medicare coverage; re-designing prototype options; while also paying my patent attorney huge sums of money to handle the patent application process. I then discovered I would need the Food and Drug Administration (FDA) to categorize the Shower Shirt product! The appropriate category would determine whether the product only need be registered by the FDA, or required to go through a complicated and official federal FDA approval process.

The FDA? Really? I didn’t want to deal with the government any more than I had too. The Medicare process was already stressful enough. Subsequently, I reached out to an organization in Chicago, the Anson Group, to help navigate through this additional requirement. My Chinese liaison then stated I should check into having product liability insurance. OK. Just another issue to tackle, and check to write, though not a bad idea since we live in such a litigious society.

With all of the legal, regulatory and policy interactions beginning to escalate, it sort of hit me what I had been working toward the past ten months. I was about to enter into a multi-million dollar mastectomy garment industry. The therapeutic focus behind all of this was to help women protect themselves while showering, not to enter into a complicated and highly regulated business. It was fascinating and exciting, but also scary. I had really not thought much about the global scope of bringing this product to market. For that matter, I didn’t even know this industry existed before being diagnosed with breast cancer.

Our goal was still to have the product on the market by October 2010 (Breast Cancer Awareness Month), which was just five months away. I knew there were still major hurdles and a tremendous amount of work to accomplish. At this point, I had invested so much time and energy, I just had to roll with the punches and deal with whatever the processes presented.

In the meantime, I received a call from my Chinese liaison who had finally received the updated Shower Shirt prototype. I was off to the shower to try my new product. I was a child with a new toy, but it was my toy.