Questions such as; “Am I wasting my time?” or; “Is this entire project useless?” went over and over in my mind as I was anticipating finalizing the Shower Shirt product. What if no one else cared about having to shower in a trash bag after amputation of the breasts? My friends and family have (on occasion) stated I am bit high-maintenance, so did the trash bag equation simply verify my needing to be high-maintenance on occasion?

The bottom line was this, it didn’t really matter what I thought or felt about showering in a trash bag. What really mattered was what the masses thought. As my patent attorney kept reminding me, the most important question was: Does the product have marketability? I’m sure a familiar question thousands of inventers have asked themselves.

With that said, I was still waiting on the updated prototype to arrive; but had been notified the shipment was in route to the United States. I had recently submitted the provisional patent application for patent pending status, and now researching steps to attain Medicare coverage; a journey I knew was going to be an extremely difficult and drawn-out process, but something which had to be attained for both the Medicare patient population and commercially insured patients. Even the initial stage of the process was absolutely mind-boggling. I had on occasion heard the term “the bureaucrats in Washington,” but never really understood the terminology. Needless to say, I quickly learned what that comment meant and will expand on the Washington D.C. chain of events at a later date.

I knew a similar item; the mastectomy camisole had Medicare coverage. I began researching the Medicare coding associated with that product. In essence, the camisole was a garment to be used right after surgery to host the post-surgical drains; a tank top of sorts with a cotton prosthesis to give the appearance of breasts, and internal support pockets. Since it was used to support the drains, as the Shower Shirt product would be, I felt we might be able to also slide a similar prosthesis into the shirt, so as to attain the same Healthcare Common Procedure Coding System (HCPCS); a long shot, but a strategic one to quickly attain Medicare coverage. 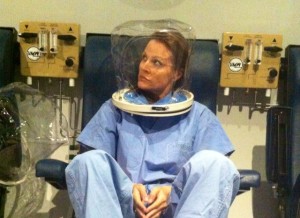 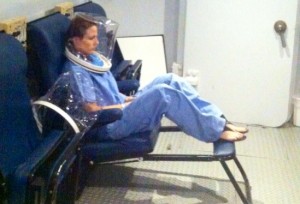 On a personal note, I was still undergoing daily hyperbaric oxygen treatments. The clinicians had removed the PICC line, so no more ‘last resort’ antibiotics were being pumped into my body. I was keeping both fingers and toes crossed the hyperbaric treatments would keep the Staph infection at bay. In between the daily hyperbaric treatments, afternoon naps, and putting my toes in the water of government regulatory codes and laws, I began reading a book titled “Unstoppable,” by Cynthia Kersey. The book detailed multiple entrepreneurial ventures throughout history. The stories were powerful based on notable organizations such as Domino’s Pizza, Bill Gates and Microsoft, Walt Disney, and of course Sam Walton. However, the most powerful message which stuck in my mind was not about the hardships of these extremely successful companies. The simple message resonating with me was, “It’s harder to bring an individual product to market which has never existed, versus a product which already exists, but is changed or upgraded slightly and remarketed.”