The Final Prototype & My Unspoken Faith - The Shower Shirt

The Final Prototype & My Unspoken Faith

I tested the new Shower Shirt prototype multiple times and it worked tremendously. After five variations, our final design was complete and ready to be introduced to the mastectomy garment market. That is, once we were able to obtain either a category determination of a registration or approval requirement from the FDA scientist group.

I wanted to be ambivalent towards this product. With all of the stress, emotion, financial constraints, surgical drains, tears and infections behind creating it, I expected to view it as a huge battle scar. Surprisingly, I couldn’t. I loved this little inanimate garment. Seeing I had never actually had children, it became my child. I felt I needed to introduce it as my own, with every bit of love that a mother has for her creation. Sounds weird, huh? Well it’s just as weird writing those words, but it was how I felt; and still do to some degree. 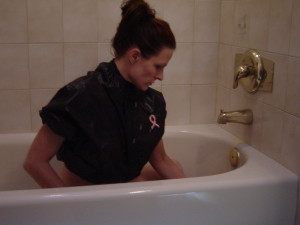 Since I was nearing my final surgery, and the Shower Shirt prototype was completed, I felt I was approaching some type of crossroad towards completion of this process. At the same time, I was also beginning another unknown journey. I knew bringing this product to market was going to change my life, my focus, and my career; for better or for worse. The product could become a joke in the mastectomy garment industry as it’s many times easier for individuals to become negative about ‘new and unfamiliar’ versus positively inspired by a new option.

I began reflecting. I had learned a multitude of lessons over the past year. Lessons I never really wanted to learn, but nevertheless, experiences which were seemingly more and more valuable as time went on. It’s ironic how various details become a blur while undergoing trauma, though many instances are as clear as yesterday. As I write this Blog, I remember the way the hyperbaric chamber smelled, phantom breast pains, and the caring voice of my significant other, Phil, asking me if I was “sad” or “happy” on any given day. I can still remember the anxiety I had before each and every surgery. When I was feeling positive, I was scared. When I was pissed off, I really didn’t care if I woke up.

I had basically survived over the past year by throwing myself into my cathartic Shower Shirt world. I missed my previous life, my freedom which came with being healthy, and of course my Mother, each and every day. I continued to lean on my faith as I was taught all things happen for a reason. I was a member of the Methodist Church and had always held my faith close, but never discussed my very simple spiritual beliefs. When diagnosed with breast cancer, my faith became a form of blind faith as I had to believe all would be OK. I have absolutely come to believe blind faith placed me in a vehicle to create the Shower Shirt product, but it was a power much higher than I who actually drove this long complicated process. Even though the Shower Shirt was my child, it was not created for me. It was created for my friends, my family members, your friends, your family members, and the hundreds of thousands of women who haven’t even been diagnosed with breast cancer as of yet.

With that mission in mind, I had to stay focused and keep marching forward. I had to get through this next surgery, become healthy again, and introduce this product to the market. My four month countdown had begun.