Introducing The SHOWER SHIRT to the US Market - The Shower Shirt

Introducing The SHOWER SHIRT to the US Market

It was September 2010. My extended medical adventures, or alternatively, misadventures were behind me, and the Shower Shirt order was being shipped from the manufacturer just in time for introduction to the market the following month. With a major amount of teamwork between my attorneys, friends, significant other, and the insatiable patience of my Chinese liaison, Mike, we had met my deadline to have the product ready and available by October for National Breast Cancer Awareness Month. I knew, for many reasons, this was the perfect month to introduce the product. First and foremost, there is always an unlimited amount of breast cancer information and publicity during the October timeframe. From a self-serving standpoint, I also knew both television news producers and newspaper print editors would be looking for unique breast cancer related stories. Since I had been a past television reporter, and had worked in healthcare media relations for years, I knew my story would resonate with those decision makers. The story line “past health reporter turns breast cancer survivor, turns inventor,” would be sellable for media coverage, thus help the promotional awareness of the product.

A week or so before receiving the first Shower Shirt shipment, I met with a local hospital-based Home Medical Equipment (HME) company to present the product. To my surprise, this group ordered 500 units! Within 48 hours, I received a call from the American Cancer Society’s Tender Loving Care (TLC) catalog department wanting to also offer The SHOWER SHIRT. In addition to those turn of events, a Lifetime TV producer from The Balancing Act (a nationally syndicated morning show focusing on women’s issues) asked if I would be interested in being a guest on their show. They requested I appear to discuss my experiences with breast cancer, and the events which led to the inception of the Shower Shirt garment, all to highlight Breast Cancer Awareness Month. With 500 units already sold, the American Cancer Society preparing to carry the product, and national publicity, I was feeling pretty darn good about the product’s debut.

In between finalizing brochures, preparing press releases, and producing an educational video, it totally slipped my mind to have a website created (seriously, how did I miss such an important element?). Once I knew I was a confirmed guest on Lifetime TV, I hired a website company to throw something together. I told them I didn’t care what it looked like; it just needed to be online for any inquiries or orders once the national morning show hit the airwaves. Nothing like waiting until the last minute, the website went live 24 hours before the Balancing Act aired. 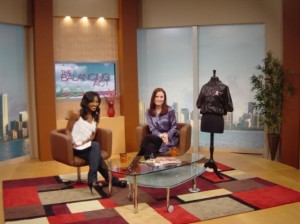 To View The Broadcast Feature: http://www.youtube.com/watch?v=Ixl8Ak3XL4k

Simultaneous to all of these cool, new, Shower Shirt happenings, I was back to work at my job in healthcare media strategy, full-time. However with the increased responsibilities involving bringing this Shower Shirt project to fruition, I was essentially working two full-times jobs. The down side was  only one job was creating income, while the other was only creating expenses. It really was a Balancing Act; no pun intended.