Exactly one week after The Shower Shirt was introduced to the US market, and while male senior citizens were getting a boost below the belt, the US government informed me my product was NOT a ‘medical necessity’ and considered a ‘convenience’ item. The term, ‘convenience,’ was rather self-explanatory, but what was the definition of ‘medical necessity,’ specifically, based on Medicare or managed care terminology? We did our research.

Managed care adjective: Referring to a covered service or treatment that is necessary to protect and enhance the health status of a patient, and could adversely affect the patient’s condition if omitted, in accordance with accepted standards of medical practice.

Well this was now more confusing to my team; The SHOWER SHIRT™ does in fact protect the health status of the patient; and could adversely affect the patient’s condition if omitted.

Subsequently, I did additional research on what products are actually considered convenience items versus medical necessities. That led me to penile implants.

Before I begin this rant, I want to first say this initial rant will precede many future rants regarding this specific finding. So again, let me be very clear as to what I’m trying to communicate. Our government states, The SHOWER SHIRT garment, a product to help prevent illness, injury and infection in women after breast cancer and mastectomy surgery is considered a ‘convenience’ item, however penile implants for men are ‘medical necessities.’ Are you kidding me? Though painfully apparent what gender makes the decisions in our nation’s capital, does that gender power role need to be so blatantly obvious? Amazing, and by the way, communicating that little piece of information while speaking to large groups of women is the perfect way to get them fired up. (Ok, one rant down, many to go, and yes, we will revisit this topic)

During this time, the government also informed me the product could not be registered under the existing code I had requested (L8015 as the mastectomy camisole) because it was not of a prosthetic nature; frustrating, because neither was the mastectomy camisole. In summary, the group instructed our company to apply for our own government code since The SHOWER SHIRT™ product had never existed before now.

Hmmm? Well, it was definitely cool to have created a product that never existed before, especially in the eyes of the US government, though introducing any new, innovative product to Medicare was going to be a major struggle. We know how well our government handles new and innovative, terms that do not coincide well with status quo and bureaucracy. More hoops to jump through!

On a positive and more productive note, we had our first newspaper article hit announcing the creation of The SHOWER SHIRT, just one week after going on the market. It was cool to see some of the behind the scenes work actually be represented to the public for the first time, in print, anyway. For the first few weeks after the FLORIDA TODAY article ran, I was known as “the shower shirt lady.” 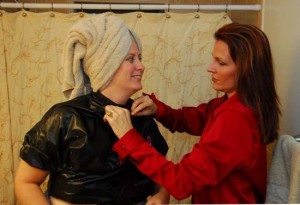