I went from being scared to death of being laid off since our company had been purchased, to believing I needed to resign from my job as media strategist at Wuesthoff Health System. Luckily, with the high profile sale of Wuesthoff, and my somewhat high profile job with the media, I began receiving calls from various organizations asking if I would be interested in working for them in a related ‘media strategy’ type role.

Who proactively leaves a job these days, especially in the fall of 2010? The economy was at an all-time low, with real estate still in disarray. A huge concern, as stated in my last Blog, was I had three mortgages. However, in thinking it all through, if I resigned now, I would have a three month severance package and could take that time to promote The SHOWER SHIRT product, and then start a new job after the first of the year, so I decided to resign.  My resignation went like this in a conversation with Steve Patoni, Wuesthoff Health System President.

Lisa:  “Mr. Patoni, I’ve decided to turn in my resignation. With the expected staff reductions with Health Management Associates, I’ve decided to resign my position as media strategist with the organization. I’m giving you my two week notice. I will contact human resources to let them know I will  take my severance package.”

Steve Patoni, Wuesthoff President:  “Lisa, you can’t resign. You are very good at what you do. I want you to stay in your existing position. Yes, we do have upcoming changes and reductions, but I want to keep you exactly where you are. You do not need to be concerned about being laid off.”

Lisa:  “Mr. Patoni, as you know, I’ve recently gone through breast cancer and subsequently brought The SHOWER SHIRT™ mastectomy garment to market. I need to focus on the promotional aspect of the product and take time off for my own personal well being.”

Steve Patoni:  “Again, you are very good at what you do. I need you to stay in your position. Please do not resign today.”

Who can leave a job after a conversation like that? I immediately phoned my significant other, Phil, and said, “Well that conversation did not go the way I expected it too. I guess I’m still employed.”

Within a few weeks, I had gone to Mr. Patoni again and requested a resignation. Essentially, the same conversation happened. At this time, Mr. Patoni asked what I wanted to stay put. I requested doing more new business development along with my existing media role, and he said fine. Basically he reiterated he would do whatever it took as long as I agreed to stay with the organization.

At this point, how could I resign from an organization where my new boss has asked me to stay twice? I felt I had no choice but to tell human resources I would forgo my severance package and stay employed with the organization.

It was December 2010, I was finally coming out of the surreal fog caused by the multiple stressors over the past year and a half.  The breast cancer surgery drama was over, The SHOWER SHIRT was on the market and Christmas was just around the corner.  Luckily, I not only still had a job, The SHOWER SHIRT was gaining awareness and I had another media hit scheduled to appear in the national magazine “New You for Women.” 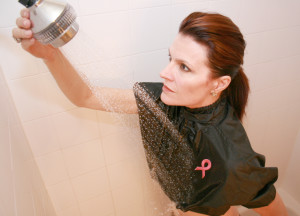 Shower in Stride – New You for Women

With 2010 ending on such a positive note, and 2011 just around the corner, I felt it was going to be a great start to a great year!