All Is Relative - The Shower Shirt

A close friend, Susan Jenks, often states, “All is relative.” Whether in relation to age, education, finances, career success, political and/or religious beliefs, it seems I hear her make that statement every other week. Susan and I have been friends for more than 15 years. We disagree often (especially on politics) but I absolutely love and admire the heck out of her. She’s a national medical writer who has a zillion years more experience than I could ever have in the health and medical journalism field. In comparison, I spent many years in the newsroom as a television news reporter focusing on the health/medical beat, and can speak to thousands of people both on and off camera and not miss a beat. Alternatively, Susan can rip off an in-depth medical piece in minutes, where it would take me days, but is extremely uncomfortable speaking in front of large groups and on-camera. I guess one would say comparing our experiences and background, “all is relative.” 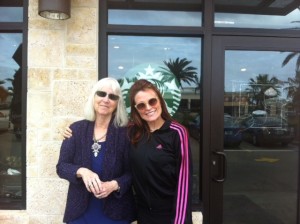 When I was diagnosed with breast cancer, many of my friends, including Susan, continually stated, “You are doing so well with this diagnosis.” I would often respond, “This is not the worst thing that has ever happened in my life. Breast cancer is nothing compared to burying my mom after her car accident.” So in comparison, all is in fact relative.

With my recent lay-off, I was bitter since I had planned my work around my boss’s request. However, I quickly realized this, too, was — all relative. I now had major amounts of time to travel to promote The SHOWER SHIRT™ product. In addition, within three weeks of leaving my job (or rather, my job leaving me), I had three consulting contracts which were paying more money working 20 hours per week, than working 50 hours a week in my previous full-time job. Of course, I no longer had corporate healthcare benefits (a problem when you’ve had breast cancer), but I had a major amount of unexpected freedom; again, all being relative.

It was April 2011 and for months, I had ramped up for my first national conference to introduce The SHOWER SHIRT™ to the masses. My colleague, Tim Crowley, had ties to multiple medical device distributors and contracted with our company for a short time for market surveying. I had joined Essentially Women, one of the largest group purchasing organizations for the breast cancer related industry, and planned to participate in their annual conference and trade show in Phoenix. The SHOWER SHIRT™ had been featured in one of their pre-conference publications as a new product introduction. It was absolutely amazing when guest after guest visited The SHOWER SHIRT™ booth and said, “I came here just to see this new product for breast cancer patients.” I thought, if these women who own mastectomy boutiques across the US are already sold on the product, then how hard will it be to sell to a breast cancer patient who actually needs the product?

These first four months of 2011 were turning out to be a huge learning experience for me. I had a job; lost a job. Within three weeks I had three new jobs. Within another month I had mastectomy boutique business owners traveling to Phoenix just to see my invention which had two years of my blood, sweat and tears mixed into every garment fiber.

I was realizing the loss of my job was actually a blessing in disguise. The experience was teaching me lessons about life which would have been nearly impossible had I remained a television news reporter in Orlando, or a corporate media strategist in Brevard County, FL. This was the first time in my life where my self-centeredness (an inherent trait of my fathers) had taken a back seat. No longer was it about me; it was really about making a difference in people’s lives. I had said all along I wanted to keep women out of the shower with trash bags post breast amputation, but this was the first time I actually felt like I just might be making a difference.

The moral of my story is this: Traumatic events such as cancer diagnosis, death, surgical infections and even job losses don’t always turn out to be a negative in relation to the global experiences of ones life. In contrast, I sincerely believe everything is essentially “relative.” One just has to find the emotional strength to ultimately find the ‘relativity.’