KUDOS to Walmart - The Shower Shirt

As General Douglas MacArthur said, “The world is in a constant conspiracy against the brave. It’s the age-old struggle: the roar of the crowd on one side, and the voice of your conscience on the other.”

Not sure exactly why I love this quote except the world is in fact roaring, but so is my voice – so the world and my voice are always in constant competition to out-roar each other.

With the Essentially Women conference behind me, I was smiling all the way home from Phoenix. We made many SHOWER SHIRT ™ sales during the conference and several came in after we returned home. More importantly, I felt good about the many mastectomy boutique business owners who were excited about my product.

We had positive momentum, but I was continually looking for some type of drama to put a damper on that momentum. Nevertheless, we were packing and shipping SHOWER SHIRT™ orders on a daily basis. I also was working as a media consultant for a local pediatrics group, and engaged as a new business development liaison for an Oregon hospital system. Before long I also was doing public relations for a healthcare technology company in the Research Triangle in the Carolina’s, and FLORIDA TODAY, our local Gannett Newspaper asked me to teach broadcast media training for their staff. My plate was full, but everyday which came and went seemed to continue to validate the blessing of my recent job lay-off.

I was also pleased the American Cancer Society (ACS) was selling The SHOWER SHIRT™ through their Tender Loving Care (TLC) retail division. However, in contrast to the enclosed television broadcast piece, within a few months they contacted us to say their lawyers ordered them to stop carrying the product due to potential liability concerns. I quickly explained we had been on the market for months, had more than $2-million in product liability insurance and had no complaints whatsoever. The TLC buyer said they had no choice but to listen to their attorneys and drop the product from their post-mastectomy garment line.

This decision was sad and frustrating. TLC was selling a decent number of units with great reviews from their customers. Secondly, being involved with ACS was huge for our company. With that said, we do live in a litigious society. Everyone has to continually cover their asses to survive. Thus, easy to understand why attorneys are one of the most despised species in this country; with one exception, my significant other Phil, also an attorney. 🙂 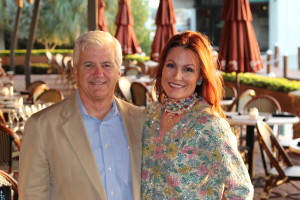 Dave (Phil) & I at a Cancer Benefit

However, within two weeks of TLC dumping the product, and exactly one-year after going on the US market (October 2011),  Walmart.com’s Medical Device Division chose to add The SHOWER SHIRT™ to their product line. Forget the American Cancer Society and TLC; YEA for Walmart!