With 2011 coming to an end, The SHOWER SHIRT™ had officially been on the market for one year, though only presented to the breast cancer/mastectomy garment industry seven months earlier. Both our retail sales and wholesale contracts were continuing to grow, but we were still not where I wanted to be.

Since the inception of this project, the rational side of my brain had continued to believe since this was a “needed” product for mastectomy patients, it would be a simple roll-out followed by sales to every mastectomy boutique in the country. With that rational thought process not necessarily happening, I was beginning to understand comments by other inventors and business owners. Comments such as, “It takes at least five years for a product to become a known quantity,” or contrasting statements such as, “Just because you build it, doesn’t mean the masses will come.” The product was not needed by the masses, only for those unfortunate individuals like me who were diagnosed with breast cancer and chose to undergo mastectomy surgery. I was trying to find our position in the market. I was still searching for the strong spots with decreasing emphasis on the weaker areas of the market.

I would frequently receive pep talks from my patent attorney, Chris Brody. He would often say (in his very slow methodical lawyer voice), “Lisa, you have no idea how far ahead of the game you are. You invented a product, brought it to market, and Walmart picked it up within eight months.” He would then discuss the many inventors who had subsequently failed to bring products to market. He would periodically state, “Unfortunately, certain individuals just don’t know when to give up.” I was glad I was not in that category of individuals as it’s just not in my nature to give up either. Nevertheless, whether he knew it or not, Mr. Brody (as I called him) was an unexpected cheerleader. My friends and family members had cheered me on, but they were required to, Mr. Brody was not. 

In the meantime, surgeons from around the country had begun to read about The SHOWER SHIRT and reached out asking if I had contemplated the garment  being used by other patient populations. Some felt the product would support End Stage Renal Disease patients undergoing dialysis treatments who needed catheter protection from water while showering. Others suggested rotator cuff patients, bariatric patients with drains, cardiac patients with external defibrillators,  along with SAVI catheter patients going through radiation treatment. This was something I had not thought about but began doing research. 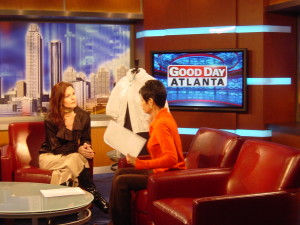 I was still fighting for Medicare coverage, something which was a painfully slow process, but required at this point. In addition, my journalism background continued to help our media relations initiatives, which supported our lack of a marketing budget. We had multiple newspaper and magazine articles featuring the product, along with a myriad of broadcast television features. I was extremely excited to have been asked to be a guest on the Good Day Atlanta morning show, located at the FOX News affiliate in Atlanta.