In January 2012, I received a second letter from the Centers for Medicare and Medicaid Services (CMS) stating my re-application for Medicare coverage had been denied, and The SHOWER SHIRT™ product was still deemed a ‘convenience’ item for breast cancer patients, versus the ‘medical necessity’ title it needed to be for Medicare coverage.

After saying a few four letter words, I regrouped and contacted my friend Dixie Samson who works as a political lobbyist. Dixie was kind enough to share contacts with U.S. Senator Bill Nelson’s office, Florida Senator Mike Haridopolos’ office, and U.S. Congressman Bill Posey’s office. I then reached out to each of their Chiefs of Staff and asked for support to better navigate through the Medicare approval process. I signed documents for access to my personal records for a thorough background check, and gave permission to obtain The SHOWER SHIRT Co.’s public Medicare coverage application documents.

In addition, I forwarded to them newspaper, magazine and television features on The SHOWER SHIRT™ to give a better idea of the reasons behind the product and the need for Medicare coverage. I then met with the various representatives and within a few weeks, had letters of support from two of the political offices. Essentially, they all had the same reaction to my story, making comments such as, “This just makes sense for Medicare to reimburse.” Senator Nelson’s office stated they would rather not write a letter of recommendation – but wanted to “stay on top of the process with CMS until fruition.”

I had a more lengthy conversation with Congressman Posey and his staff. I loved his personal comment directing his staff to “write a letter to CMS and ask why they were discriminating against breast cancer patients.” This statement came after I revealed Medicare covers shower coverings and dressings for end stage renal disease patients going through dialysis treatment, but not for breast cancer patients. 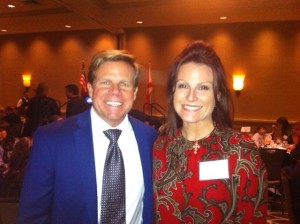 Coincidentally, the same week I was told we had no Medicare coverage I heard from my patent attorney. He stated our existing patent application which gave us patent pending status for the previous year was about to expire and we needed to decide on a plan of action. As much as I liked my unexpected cheerleader patent attorney, Mr. Brody, I knew that plan of action was going to cost money. It seemed like a two-thousand dollar call every time I picked up the phone to talk to him about the next plan of action. Since I was not sure exactly how to proceed (as I didn’t know if we should tackle a domestic or international patent), we opted to file a patent under the Patent Cooperation Treaty (PCT) application process. The PCT application reserved our right to file in foreign countries as well as the United States for another 18 months. This gave us more time to figure out our best plan of action, without too much financial pain.

In the meantime, I was still working as a media strategy consultant with multiple clients, while traveling across the country to as many breast cancer conferences that both my pocketbook and schedule would allow.

I kept saying to myself, “All I wanted to do was keep women out of the shower with trash bags post-mastectomy. I never imagined it was going to be so difficult trying to attain Medicare coverage to keep these mastectomy patients protected.”