Soon after my guest column hit FLORIDA TODAY with comments on the upcoming November 2012 presidential election, I was asked to be a part of the Huffington Post’s ‘Entrepreneurs Start-Up’ exhibition at the Republican National Convention (RNC) in Tampa, FL.

It was somewhat ironic as I was raised in a staunch democratic family, married a staunch Republican, but was registered as Independent. With that said, I would acknowledge any party affiliation needed if it allowed me to participate in the Republican National Convention (RNC). Luckily, party lines didn’t come into play as the Huffington Post was only focused on providing networking exposure and support to innovative start-up companies looking to gain contacts. Needless to say, the ‘start-up exhibition’ was fascinating. There were all categories of organizations; from transportation to technology companies, medical equipment to surgical devices. Since the RNC events were essentially spread across the city of Tampa, we saw only a portion of the convention programs.  Nevertheless, an experience I was honored to be part of and will never forget.

I briefly met Arianna Huffington, head of the Huffington Post, who held a private reception for exhibitors. This was an extremely busy event so there was not much time to converse. I was really hoping to pull her into a corner and discuss the whole Medicare, male versus female penile implant versus The SHOWER SHIRT™ issue, but in hindsight, I guess not necessarily appropriate at the RNC venue. 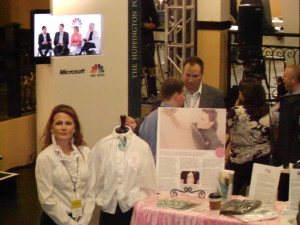 I’ve enclosed an article written by Space Coast Medicine & Healthy Living on The SHOWER SHIRT Co. being one of only a few companies in the state of Florida chosen to attend the Republican National Convention: https://www.theshowershirt.com/wp-content/uploads/2014/03/Space-Coast-Medicine-Healthy-Living.pdf

In the meantime, and as promised, exactly four months after presenting to the Healthcare Common Procedural Coding (HCPCS) committee in Baltimore requesting our own HCPCS code, we received the final decision as to whether our product was going to be awarded. DENIED! “If at first you don’t succeed, try, try again,” was definitely becoming a daily theme with The SHOWER SHIRT team.