Business As Usual And A Special Introduction - The Shower Shirt

Business As Usual And A Special Introduction

It was summer 2013. As the next few months rolled on after being awarded our patent, we continued to have many television guest spots at both FOX and CBS affiliate stations. We visited FOX in Nashville, Memphis and Orlando, as well as the CBS affiliate in both Orlando and Jacksonville, and even attained two feature business articles in the Orlando Business Journal on our increase in sales and ongoing Medicare fight. 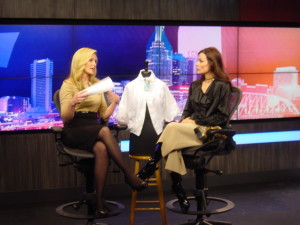 On the FOX 5 Television set in Nashville with Host, Kelly Sutton

We were gaining momentum in terms of national educational outreach and participating in as many national breast cancer and kidney/dialysis conferences as our budgets would allow. During this timeframe, we stumbled across the fact The SHOWER SHIRT™ was covered for End Stage Renal Disease patients, (ESRD) patients undergoing dialysis treatment. Due to this recent finding, and our marketing initiatives, we began receiving calls from dialysis patients as well as large dialysis centers from across the country. Essentially, The SHOWER SHIRT™ was covered under the composite payment bundle for ESRD patients under Medicare code A9270, meaning the medical provider was required to order the product for the patient if deemed medically necessary. Of course many patients couldn’t understand the process so we found ourselves constantly trying to explain. Nevertheless, it felt great to say the product was covered by Medicare for dialysis patients, though sadly, we were still a long way from Medicare coverage for breast cancer patients.

As our momentum continued to increase, we were also selling bulks of the product to hospital foundations wanting to supply to their breast cancer patients post-surgery, as well as dialysis centers simply providing to ESRD patients during treatment. During that same timeframe I received a call from a lady in Rockledge, FL, who wanted to purchase The SHOWER SHIRT for her daughter who was undergoing dialysis treatment. Since she was in the same county as I live, I chose to drop the order off at her home versus ship. Mrs. King was absolutely delightful, but clearly upset about her daughter being acutely diabetic, extremely unhealthy and of course unable to shower due to the hemodialysis catheter sutured into her collarbone – a standard protocol for ESRD patients while undergoing dialysis treatment.

I remember her showing me exactly what she was going to do in terms of cutting and sewing our product to fit her daughter’s mid-section as she was a 3X Plus size and our largest size was definitely going to be snug on her daughter. I will always remember Mrs. King. She was the familiar image of  a loving, caring mother who was the sole care-taker of a gravely ill patient who happened to be her daughter; I could clearly see her pain. After meeting her that day, she kept in touch even forwarding photos of her daughter in the newly created cape-like SHOWER SHIRT.

Within six months after meeting Mrs. King, she sent a note to say her daughter had passed away, “at the tender age of 39,” but wanted to thank me for my “contribution in helping her daughter shower the last few months of her life.”

Wow, did that note get to me! It’s because of incredibly positive, life altering memories with Mrs. King, I have kept the resolve to continue this uphill battle of making patient’s lives better by providing a protective garment to shower in, versus a plastic trash bag.  As my friend Mara Hixson has said several times, if you can at least bathe and feel better physically, you will feel better psychologically, something that’s gravely needed when you are ill.