The Luck of the Irish - The Shower Shirt

The Luck of the Irish

After many months of hyperbaric treatments and a few weeks of oral antibiotics, I was holding my breath I did not contract a third infection. I was constantly checking the left breast for any redness, while monitoring everything from energy levels to temperature. My last two infections were absolutely identical in terms of how my body reacted, so I was compulsively focused on any increased physical pain, fever, and nausea or dizziness.

I’ve always been an extreme person; extremely happy or sad, exceedingly excited or immensely pissed off, while often having an acute sense of hyperactivity, or the polar opposite resulting in days of sleeping. Familiar to these extremely inconsistent emotions, I have also experienced those extreme peaks and valleys in terms of personal luck. I either have been extremely lucky, or in contrast, extremely unlucky throughout my life. 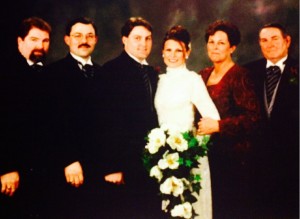 I was lucky to have a mother who loved unconditionally; though unlucky as she died at the early age of 60, and only a few days after the enclosed portrait was taken. I was lucky to have a father who was a phenomenal provider, though unlucky as with that privilege, there was always a myriad of controlling conditions and strings attached. I also was lucky to have three protective, ethical, and atypically respectful brothers, along with a multitude of solid friendships through my many stages of life. Though majorly unlucky in love through every stage of high school, college, and my 20’s and 30’s; luckily, my love life changed for the better in my early 40’s.

With that said, I was not sure I was going to have a lucky outcome at this stage. I believed I was destined to attain another infection and required to live with one breast the rest of my life. Would that be a life-changer? Absolutely not. Would it be quite disheartening? Absolutely.

At this point, I needed a lot of my mom’s Irish luck as the entire team of clinicians felt the infection would come back. Their opinions were based on medical theories related to placing foreign objects into infected bodies. Of course I would continually hear Dr. Z in the background saying, “If you get another infection, we are done. We cannot go back in and try to rebuild the breast due to the massive amount of scar tissue in your chest.”

Luckily, through the grace of God, many wise medical providers making wise medical decisions, and what I choose to believe was my mom’s inherited Irish luck, no infection reappeared.

YES, I could now look in the mirror and see two breasts, albeit a rather scarred and no-nippled pair of breasts. Unfortunately, they could not be tattooed to reflect nipples – sounds gross, but a normal process after a mastectomy. They felt any type of tattooing on the problematic left breast could possibly upset the entire apple cart.

As my life has continued to be a massive amount of peaks and valleys, this experience was no different. I was unlucky having been diagnosed with breast cancer in the first place. I was unlucky to have been required to have multiple surgeries because of the complications caused by two hospital acquired infections. However, I was extremely lucky to come out of this drama healthy, and with a decently positive attitude. Life is bittersweet; we are all required to deal with the good, as well as the bad. All in all, I’m blessed for many reasons, even though the valleys in my world seem to be more prominent than that of the peaks.

Now that I was finished with the final surgery, and again own two breasts, it was time to get The SHOWER SHIRT product on the market for those future breast cancer patient’s requiring mastectomy surgery.