Out of Debt - The Shower Shirt

By spring of 2014, The SHOWER SHIRT Co. was out of debt. We were able to pay off the entire 2,000 units of product inventory (remember, our manufacturer unexpectedly increased our minimum order from 675 to 2,000), and legal fees for attaining our patent. We knew from the beginning, product inventory and legal costs were essentially going to be our largest financial burdens. All other costs related to conferences, marketing, and travel had been paid consistently over time. We felt extremely fortunate the company had essentially been able to ‘hold its own’ with most of the financials over the past few years. We were also extremely thankful for our patent attorney, Chris Brody, and Chinese liaison, Mike Wilson, for extending patience by letting us pay our debts as we could. With all that said, wow, did it feel great to have the company “out of debt.”

In the process of paying off monies related to the company, I was also trying to pull myself out of debt personally. As you may remember, when I was laid off from my corporate media strategy position at Wuesthoff Health System in February 2011, only a few months after bringing the Shower Shirt product to market, I had three mortgages hanging over my head; two condos and a farm. Since being laid off, I had consistently worked as a corporate healthcare consultant while also managing the operational and marketing aspects of The SHOWER SHIRT Co. Luckily, with the consistent consulting work, I was able to pay off two of those three mortgages. Needless to say, I was again feeling more and more confident about my personal finances, along with The SHOWER SHIRT Co.’s growth and consistent income receivables.

By this time, the Shower Shirt product was available at more than 70 mastectomy boutiques and hospital-based retail locations across the United States, Europe and Canada. The product was still being sold online with Walmart.com Medical Device Division, Health Products For You, Amazon, and Cure Diva; an international breast cancer/mastectomy e-commerce site with offices in Germany, Israel and Miami, FL. The product has also  been shipped internationally to Canada, England, Ireland, Australia, New Zealand, Japan, Israel, Spain, and Austria.

We had continued to gain media coverage locally, regionally, and nationally.  Coincidentally, around that same timeframe, WKMG Local 6, the CBS affiliate in Orlando, FL, also phoned requesting an interview for a broadcast feature for their ‘Making A Difference’ segment.  We  were ecstatic to be part of this programming as they only choose organizations in which they believe to be truly making a positive difference in the lives of individuals.  A wonderful compliment to be featured on this specific television news program. 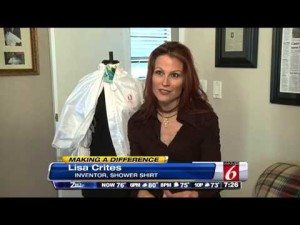 On a personal note, to celebrate my paying off two mortgages and The SHOWER SHIRT Co. finally being out of debt, my husband David (yes, I was married at the end of 2013), and I decided to take a trip to the Mediterranean. Somewhat ironic, I guess human nature to get out of debt on one front and then immediately spend money on something else.  Nevertheless, we had a great time in Italy, Greece, Sicily and Turkey! 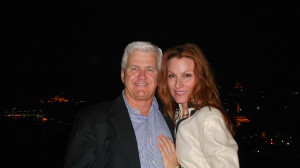 David (my new husband) and me on Oceana Cruise Line overlooking Istanbul, Turkey